Freeciv-web now supports rendering the map on a 3d globe using Three.js.
This new feature can be found by clicking the options tab, then "Show globe view".
It supports both WebGL rendering and Canvas rendering.

Please give it a try and report if it works for you! Is there anything that could be improved?

Here's a screenshot of the new globe view: 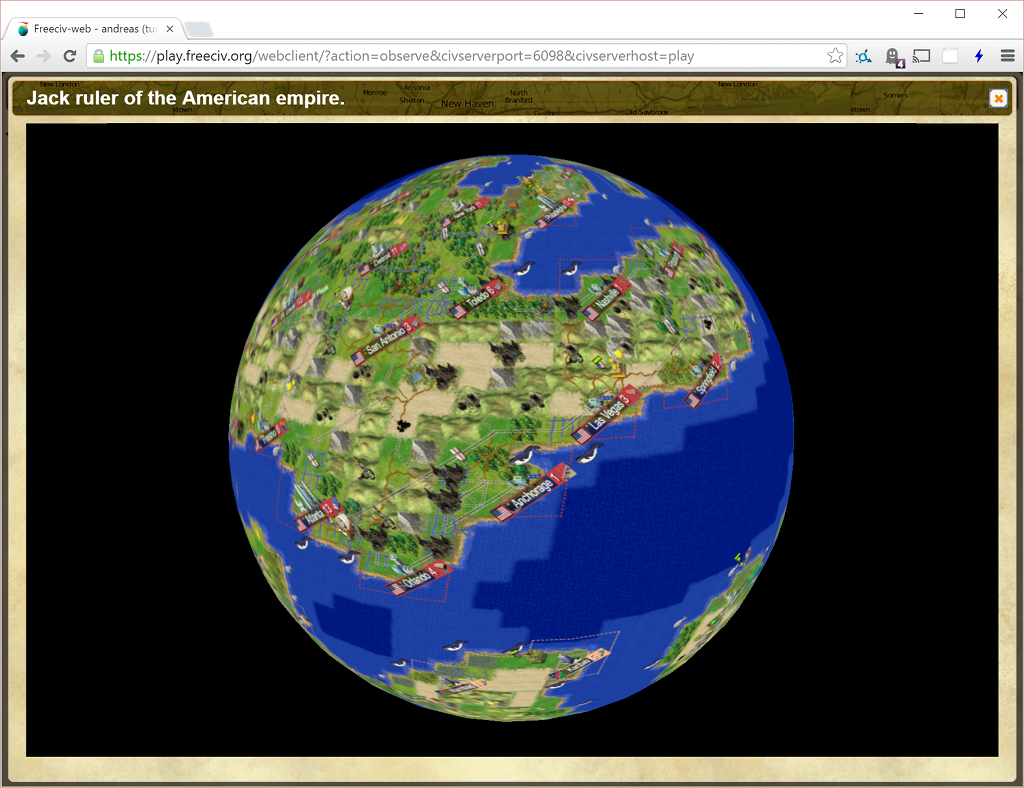 I have tested it in Chrome and Firefox. It does not work in the Microsoft Edge browser.
Top

Thanks for the feedback. Do you have some more information about when it doesnt work?
Top

AndreasR wrote:Thanks for the feedback. Do you have some more information about when it doesnt work?

I was trying to center the view by right-clicking the minimap. My bad! I didn't get the globe isn't integrated into the main map yet.

Some issues I found today:
- I have trouble using the globe (wasd don't mean anything with my keyboard layout, and don't seem to work as expected anyway)
- The globe is black on black when you don't know the whole map
- Using up/down arrows scroll the window (uncancelled event?)
- The popup "Shows the current map an a 3d..." remains visible after the globe is closed
I filed a Gna! report for an unrelated bug.

I have fixed most of the issues you reported, louis94. Is there anything else to improve? Would it be fun to play the regular game using this view?
Top

Is it fixed in production or in code only ? Navigation is still difficult. I recorded a short screencast [edit: here it is] of what happens when I open the globe (without pressing any key): my country disappears quickly… As I understand, the globe spins at constant (or random) speed, whether or not you use the keys. That's fine when you know the whole map… else you don't know where you are, and whether you are even facing the globe.
As for using the globe to play, it's still early to say (and I won't have much time for testing in the next month). It should at least not hamper navigation, and the 3D view should show roughly the same amount of time as the 2D map. Other than that, legibility of city names, unit activities (R, W, …) and the like is a big concern.

A small bug: When you close the 3D view, the minimap is centred where you were in the 3D world (?), but the flat map is not.