by AndreasR
NeptunesNook is doing a new Let's Play Freeciv series, which can be seen here: Enjoy! 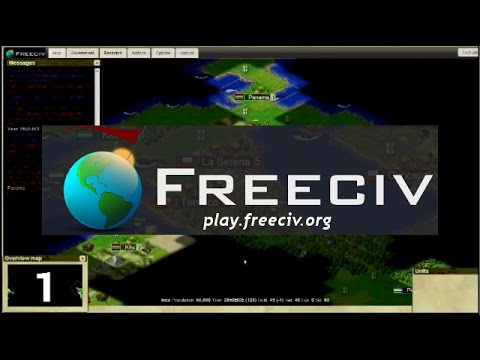 by sveinung
Hint: To defend a city against tech theft place a Diplomat or a Spy in it. The next time someone tries to steal a tech the thief will have to fight a diplomatic battle in stead. The battle will kill the thief or the defender. All diplomatic defenders in a city must be killed before a tech can be stolen from it.

by Nook
Ah! Thank you so much, I knew there had to be some way of stopping them. Will having 1 defend be enough or should I stock each city with more than that?

Nook wrote:Ah! Thank you so much, I knew there had to be some way of stopping them. Will having 1 defend be enough or should I stock each city with more than that?

Depends on your strategy and where you are in the game. Attacker and defender start with equal odds. A Spy gets a bonus. A veteran gets a bonus. The defender gets a bonus in your capital. The current AI is kind. He won't bribe your city to change side as long as you have a tech he can steal. A non allied city can be bribed unless it is the capital or it belongs to a democracy.

I don't think anyone has discovered Espionage yet. Espionage allows building Spy units. Veteran diplomats shouldn't be common. Diplomats will die after tech theft. A Spy can escape and become a veteran. I don't think anyone has discovered Communism yet. Communist nations builds diplomats and spies as veterans. Defending diplomats may have become veterans. Thanks to the techs from the Great Library and the AI kindness you probably won't lose a city even if your defenders have bad luck.

by sveinung
Democracy protects against bribing cities and units. It doesn't protect against tech theft. (Under Democracy the senate must approve your wars. They will accept a tech theft incident as a casus belli)

by sveinung
Hint: You have many Warriors. Leonardo's Workshop will upgrade 1 unit pr turn for free. It will be obsolete when Automobile is discovered. You can use a Caravan to hurry the production of a great wonder.

by Nook
Sveinung you are my hero!

Do you think Leonardo would be more valuable than Adam Smith? Ii seems to me Adam smith would pretty much solve my money troubles. Also, does Electricity cancel out the Great Library still?

Nook wrote:Also, does Electricity cancel out the Great Library still?

Yes. The exact rule is that it becomes "obsolete_by" the "Tech" "Electricity" being discovered by any player in the "World". It is TRUE that the obsolescence "survives" even if everyone forgets about electricity. (Translated from the ruleset format to English)

Nook wrote:Do you think Leonardo would be more valuable than Adam Smith?

Though choice. Adam Smith doesn't get obsoleted. It will be awesome when you get more cities and buildings. You already got buildings that would benefit from it.

Nook wrote:Ii seems to me Adam smith would pretty much solve my money troubles.

So would more trade routes. Try to give all your cities the highest number of trade routes possible. You start with max 2 trade routes pr city. Magnetism and The Corporation give you an extra legal trade route pr city each. (source)

Consider using the one time bonus from Establish Trade Route to rush other Caravan units that you are producing. Some players makes the first Caravan pay for the next.

The ideal trade route (in terms of profit) is between two giant cities at the opposite sides of the planet, located at different islands and belonging to different players.
All times are UTC
Page 1 of 11
Powered by phpBB® Forum Software © phpBB Limited
https://www.phpbb.com/