pungtryne wrote:About the IPs. Without knowing the exact laws on this, an IP is (in some, but probably not all cases) considered private data like your credit card info and personal ID number. An organization or business, at least in EU, can't just post their users IPs. At least not without consent, and I'm unsure if that's possible even.

You are right. The IP address is considered private information, at least in the EU (and therefore in Germany, where Freeciv-web is hosted). Even recording the IPs without prior user consent is illegal. A privacy policy is needed in any case (even if no personal information is collected). IIRC, the information collected must be limited to what is strictly necessary in order to run the service. And I think stronger laws are on the way.

Disclaimer: I'm not a lawyer.

PS: Freeciv-web may also not use cookies (or HTML5 storage, which is the same as far as the law is concerned) without prior user consent.
Top

So you're saying that this is illegal?
Top

No, it's not illegal. Freeciv-web does not store Personally identifiable information.

However, I can remove storage of IP addresses, if people don't want it. This means that there are no means to ban users by IP address, though.

Wikipedia states "IP address: (when linked, but not PII by itself in US)".

However, I will remove the storage of IP addresses in Freeciv-web and release it to the production server tomorrow.
Top

So it seems. Server addresses user explicitly asks to be made public by asking server to be listed on metaserver, and it's necessary there for the metaserver to function, but player host information is mostly useless. We should not waste horizontal space to it. No matter the legal status, that column should be removed.
Top

So it seems. Server addresses user explicitly asks to be made public by asking server to be listed on metaserver, and it's necessary there for the metaserver to function, but player host information is mostly useless. We should not waste horizontal space to it. No matter the legal status, that column should be removed.

Interestingly, also the Freeciv GTK client shares IP address or hostname of the other players. 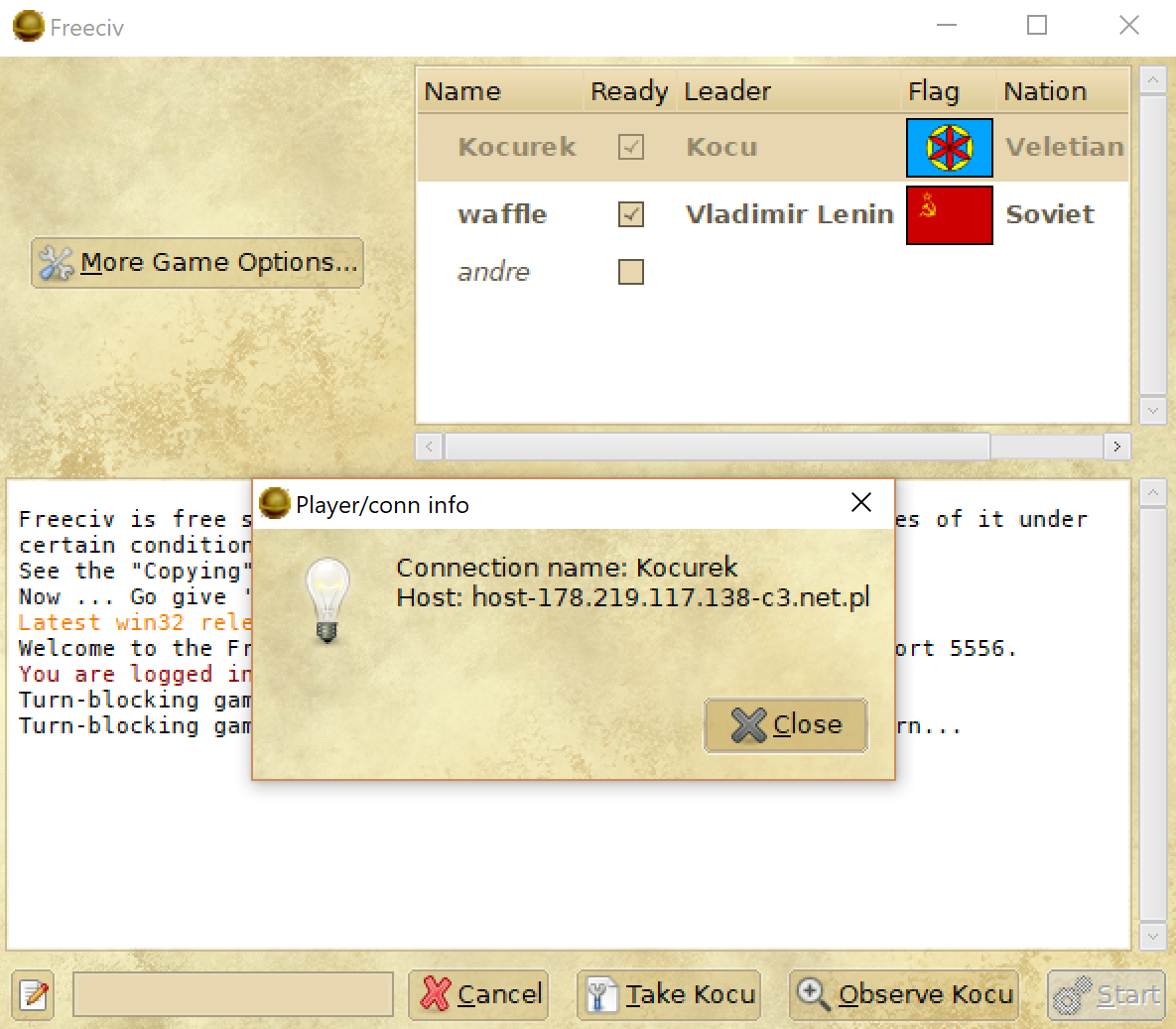 As long as there are plenty of open slots, and anybody can easily create an account and join a game in progress, then this problem will inevitably exist to some extent.

Making it more inconvenient to create multiple accounts would help
One relatively easy thing would be to require an email verification in order to create an account, allow only one account per-email, and disallow throwaway email domains like mailinator, etc. This would still be fairly trivial to circumvent, but it would make it much less convenient. I could probably create a 2 or 3 accounts, but it would be a real pain to create account after account, hoping to spawn somewhere convenient to my current game. As has been pointed out, most people who are using this tactic are doing so casually … because it's easy.

But that's not really the problem IMO
The real reason that this problem exists is that there are simply too many idle slots in these LT games.[/b] As far as I can tell, there are maybe 20-40 serious players in most LT games. With 200+ slots, you can either allow people to create multiple accounts, or you can have LT games with 80% idle players. Sweeping up idle players just isn't that fun, so I completely understand why someone might be tempted to create a dummy account in order to claim some of that territory. Personally, I'd much rather play against a real human than than an idle player, even if that human has more than one account in the game.

The real solution might be to reduce the number of slots in LT games to say… 40?
Top

drdogbot7 wrote:The real solution might be to reduce the number of slots in LT games to say… 40?

No, because you can't be sure who will become an idler and who won't. You'd end up again with 80% idlers and 20% active people, only this time that 20% would be 8 players.
Top

I have implemented some measures to prevent the creation of multiple accounts. Also, creating new accounts is now disabled if you are already logged in. Is there any evidence of people cheating with multiple accounts?

How can we get more players to be active in the LongTurn games? In July we had 19000 active users on play.freeciv.org according to Google Analytics. Most people prefer to play single-player games.

I think that the current LongTurn games are working nicely. We have significantly more players now than Longturn.org ever had.
Top
Post Reply
28 posts