Can you help improve your favourite game? Hardcore C mages, talented artists, and players with any level of experience are welcome!
Post Reply
23 posts MegaHispaniola 200x082=16k, 40% land, Classic, Flat, v1.sav
It's the shape of Hispaniola and to some degree the correct terrain but it's large enough for many cities. It's the shape of Hispaniola and to some degree the correct terrain but it's large enough for many cities.

Congrats on your first scenario. If you allow me some critique:

1. Make them way smaller! Less is more. The game gets pretty boring if the distances between players are so big that they need an eternity to reach each other. You basically get no momentum such big distances.

3. Give it a natural feeling and do some "landscaping" by making it look less artificial. It's a bit of work since you have to look at different maps like Köppen climate maps, topographic maps, maps of rivers etc. You can also make valleys for rivers but the result is rewarding.

Take a look at some of my maps. I tend to make them small but detail-rich:

You can download this one over the modpack installer:


This is a rather big map but most of it is simply ocean or not settlable land.


If you have questions drop me a message.

Btw. I collected all the scenarios I could find of Freeciv here: http://forum.freeciv.org/f/viewtopic.php?f=14&t=809

You can post yours there. Some of them are mine but not all.
Top

I made the maps for -me- (against "A.I." players), so each was designed to -my- preference at the time of creation. The MegaHispaniola and MegaJamaica maps are somewhat largish, deliberately so, because at the time I made them, I was specifically interested in the logistical challenges of huge amounts of space with tons of other tribes. The labyrinth map was made much smaller but again with a deliberate logistical issue in that the map itself is a bit of a puzzle in several ways. Specials are missing from -all- maps which I create because I don't like them. I'd rather that the difference in performance between tribes on similar terrain (or in same starting positions across multiple games) be only skill at terrain alteration / transformation choices.

I'm not quite sure what "a natural feeling" could possibly be in a FreeCiv map. The Hispaniola map is actually derived from an elevation picture which I will embed inline below. I "flattened" that image to 7 colors, blurred it a bit to ensure that it would translate to square tiles well, then saved it in PPM format and programmatically converted the PPM image to a FreeCiv terrain layer map. FreeCiv doesn't provide a third dimension (height) so in trying to demonstrate height one could either place a single mountain tile, for instance, where the real elevation picture shows a large area occupied by one mountain, or one could use many mountain tiles to show the entire 2D area which is occupied by that one mountain. I chose the latter method as being more representative of the actual land in a 2D view (looking down from above as it is in the original elevation image.)

The screenshot I posted originally of the MegaHispaniola map is showing a section that is just below the center of the original image. The two inland lakes are visible in both pictures. The "mountains" of Hispaniola may not actually be all that mountainous, but within FreeCiv there are very few tile choices (seven, basically) that indicate elevation. So I used mountain tiles for the highest areas of elevation on the map. The terrain may seem unnatural but it's actually a pretty close match by elevation.

Attached is another map, a very small one at not even 3,000 tiles. On the other hand... the land is a spiral strip and a warrior unit walking from the beginning to the end of the spiral would take roughly 1,270 turns while the MegaHispaniola map is only 200 tiles wide by 100 tall.

Despite being quite small, the Spiral Sea map / scenario presents some similar logistical issues as the Wrecktangular Labyrinth map but also adds the problem of long traveling distance for both land and sea units.

Here's a screenshot of the Spiral Sea scenario in play, and the scenario file is attached to this post. 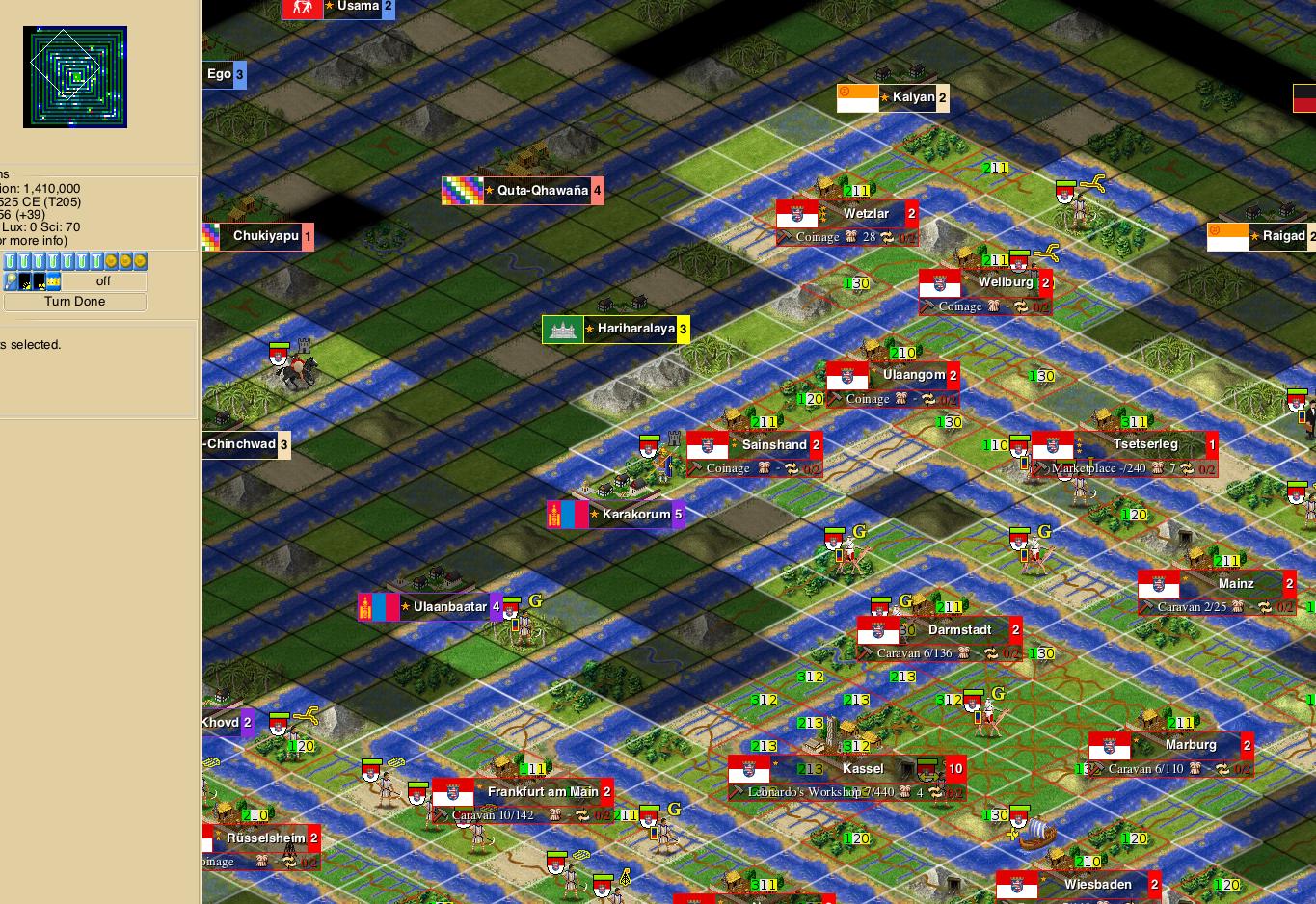 Waffle World 100x050=5k, 50% land, Classic, WrapX+Y, v1.sav
Very pleasant land with a twist, every other tile is water... Land and sea units can fight side-by-side anywhere, somewhat like the Wrecktangular Labyrinth and Sprial Sea maps, but with this map it's impossible to block sea traffic. Arctic Hot Springs 150x100=15k, 93% land, Classic, WrapX v1.sav
Are you tired of pleasant maps that allow cities to flourish anywhere? Then try Arctic Hot Springs! The vast majority of the tiles are tundra and it's not pleasant at all!

Specials are missing from -all- maps which I create because I don't like them.

Fair enough, if you don't like them. Personally, I like them since they force you to make a decision and give you a variety of options suited to your strategy but then again, that's preference.

I'm not quite sure what "a natural feeling" could be in a FreeCiv map. The Hispaniola map is actually derived from an elevation picture which I will embed inline below. ... FreeCiv doesn't provide a third dimension (height) so in trying to demonstrate height one could either place a single mountain tile, for instance, where the real elevation picture shows a large area occupied by one mountain, or one could use many mountain tiles to show the entire 2D area which is occupied by that one mountain.

In my maps, I try to aggregate geographic information over several tiles. So if there was a range of mountains with forests I simply mixed forest tiles into the chain of mountains to represent a wooden mountain. It's a lot of manual work but I like the eye candy. I think it is best exemplified in my German States scenario. You can even download it over the modpack installer.
Top

I tend to play with only two settlers per tribe as starting units. No eXplorers. Most tribes do not scout much with their settlers - their settlers build at the first acceptable spots they encounter. Most tribes also do not send out units to scout during the early part of a game (before turn 50 for instance.) As a result, any specials the "A.I." controlled tribes might have would be purely by random chance. I'd rather play without specials/resources and rely solely on strategy for land improvements.

XYZ wrote:In my maps, I try to aggregate geographic information over several tiles. So if there was a range of mountains with forests I simply mixed forest tiles into the chain of mountains to represent a wooden mountain.

That is essentially what I did, but with a different interpretation of the mountainous area. Have you seen the "Dominican Alps"? Here's a picture... Not a lot of forests there. In fact, there isn't much at all on those mountains other than what is known as "scrub" - basically weeds, vines, lightweight bushes and young sapling trees which have not yet grown heavy enough to fall over. The primary characteristic of those mountains is that they are barren.

I think we have roughly the same idea with different interpretations of the area and how to show it on a FreeCiv map. And granted, mountains and glacier tiles do not make an area friendly to building cities but I again refer you to the photo above regarding the reality of the unfriendliness of those mountains.
Last edited by Molo_Parko on Fri Aug 27, 2021 2:10 pm, edited 1 time in total.
Top I cropped that screenshot a little too tight and the overview map isn't fully visible. Well, I guess you'll just have to play it to see what it looks like. This one has 40 preset starting positions and a surprise or eight. Rapids Canyon Valley 100x200=20k, 93% land, Classic, Flat, v1.sav This fictional place isn't Rapids Canyon, which is good because Rapids Canyon is nothing but a canyon carved through a mountain range by a whole lot of fast moving water. This scenario/map is of the valley which formed where the rapids broke-out of the mountains as all that water travelled to the sea. It's a long, narrow valley with only a few hills left after the water scoured away most of the rock that was here originally. Now it's a very pleasant grassland area with lots of rivers and streams running every which way. It's a perfect site for starting a new civilization! 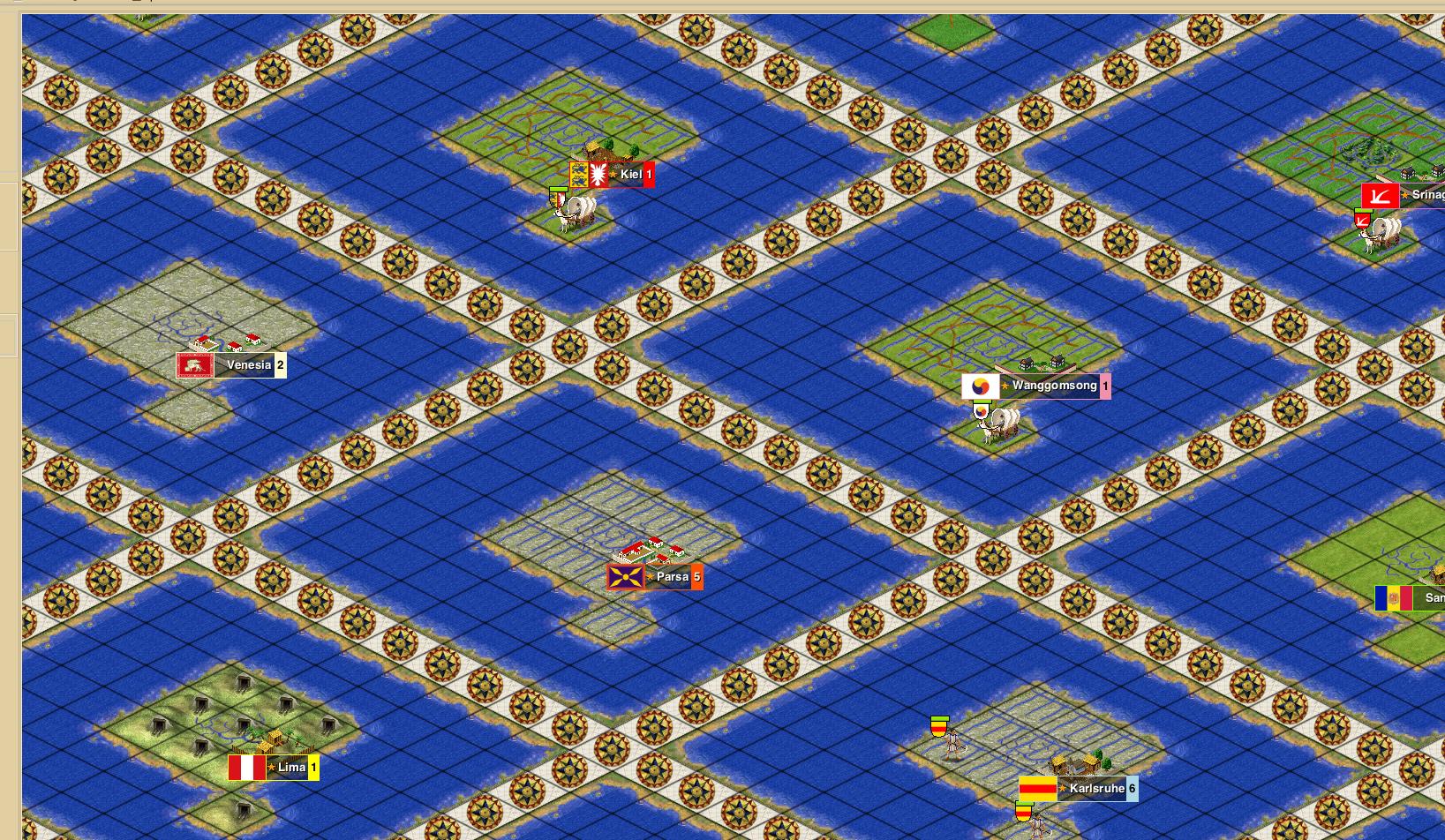 TuringTest 3x3+1, 101x82=8k, 33% land, Classic, Flat, v1.sav This scenario/map isn't a normal game but rather a test of how the computer controlled tribes perform compared to a human controlled tribe, on small islands of a single terrain type each. It's like a Turing test for the computer controlled players, and/or a training session for the human player. It probably won't be everyone's cup-of-tea, but if you're interested in comparing your decision-making skills against the "A.I." controlled players, then you might find this scenario interesting.

Waging military warfare is not possible* in this scenario since the "inaccessible" barriers prevent any unit contact. Negotiations with other tribes are only available through one wonder - Marco Polo's Embassy. There is no fighting at all, it's strictly a contest of skill in dealing with building and advancing your civilization in a difficult and very restricted environment. You might be surprised at how well you do compared to the "A.I." players.

* = Well, I suppose that one could build two cities, give one city to another tribe and then capture the city... but uh, why?

EDIT: Replaced file with v1.1 after correcting minor error regarding no river on two islands.

Lake River Desert 100x200=20k, 92% land, Classic, Flat, v1.sav
An unusually wide river divides a desert area. Technically, the river is a lake... but the lake is very much like a river.

Seventy-nine pre-configured starting positions, or play with fewer tribes for a less hectic game. The two main difficulties with this map are the distance between your towns as you expand along the river, and the difficulties in crossing the river... Have fun!

This post is the end of page 1 of this topic. There are more scenarios on page 2.