Changes in what a 2.6 rule set can do

Contribute, display and discuss rulesets and modpacks for use in Freeciv here.
Post Reply
143 posts

This feature is not strictly about what a modpack can do, but meant for modpack authors anyway:
Emitting warnings about deprecated constructs in the modpacks. Such constructs have been the right way to do something in older freeciv version, work in current one though better way to do the same thing exist, and are going to stop working in future versions. Warnings about them can come handy when updating modpack from freeciv version to another - things that still work might need adjusting to make them to use the new better way, that will also work in the future.
These warnings are only emitted when commandline parameter (to client, server, or both, depending which deprecations one wants to follow) '--warnings' has been given. It's recommended that modpack authors use that option, but the end-user is not annoyed with those warnings when running without the parameter.
This is still work-in-progress in current S2_6 codebase, so if your modpack comes warnings-clean now it's worth checking it again later when more things are being checked.
It's a known issue that freeciv's own helpdata gives some warnings that custom modpack author can do nothing about. Just ignore those for now.
Top

Example: any unit that has the user unit type flag LowMoraleExploiter and is behind City Walls can bribe a low HP enemy unit outside the walls.

You can now prevent automatic help text generation about what enables or disables an action. Use this if you already have documented it by hand.

Example: you have documented unit bribing and city inciting. (What units can do it, who it can be done to, who are immune etc)

Is it possible to allow units to survive after they perform an action? For example diplomats that survive when they "Investigate City".
civ2civ3 Earth (Ruleset for v2.6)
Top

bard wrote:Is it possible to allow units to survive after they perform an action? For example diplomats that survive when they "Investigate City".

A unit with the "Spy" flag will survive "Investigate City". I didn't get around to fine grained action by action control. I hope to do it as a part of generalized actions in 3.0.
Top

A summary of the new 2.6 stuff available to modders can now be found in NEWS-2.6.0.
Top

What is a current state of art of Policy Multipliers sliders? Is it implemented for all clients? How to define policy icon?
Augmented2 ruleset/modpack for freeciv2.6: viewtopic.php?f=11&t=91047
Top

I tried to use Multiplier Policies:

Seems that Qt client doesn't recognize policy start/stop value - it always set start to 0,
so they are broken (they usually need to start from 1, because are multipliers): 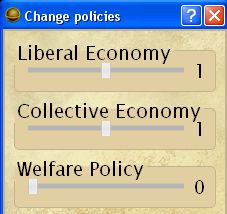 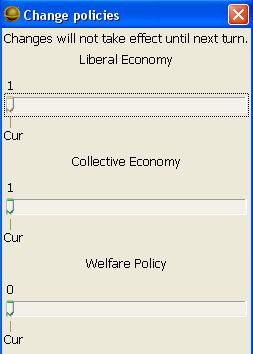